I just recently picked some great stuff on Blu-ray at amazon.com and I wanted to not only share but also point on some great amazon horror movie deals and steals they have going on right now. I don’t know how long this pricing is going to last. For example, I don’t have a lot of money to spend like I used to so I tend to shop a lot on Amazon. And by “shop”, I mean put a lot of things in my cart and then edit my huge cart down to just a couple of items I can actually afford.  But, I see how the prices fluctuate over time on the items I have “saved for later.” My point is, sometimes the price goes up and sometimes it goes down. I have nothing to do with that. The prices I am showing here today are as of right this minute.

First, let’s talk about these great movies I just got in the mail yesterday! The Final Girls, Creature From The Black Lagoon, 3-Headed Shark Attack and a Final Destination 4 pack that contains the fist four films. 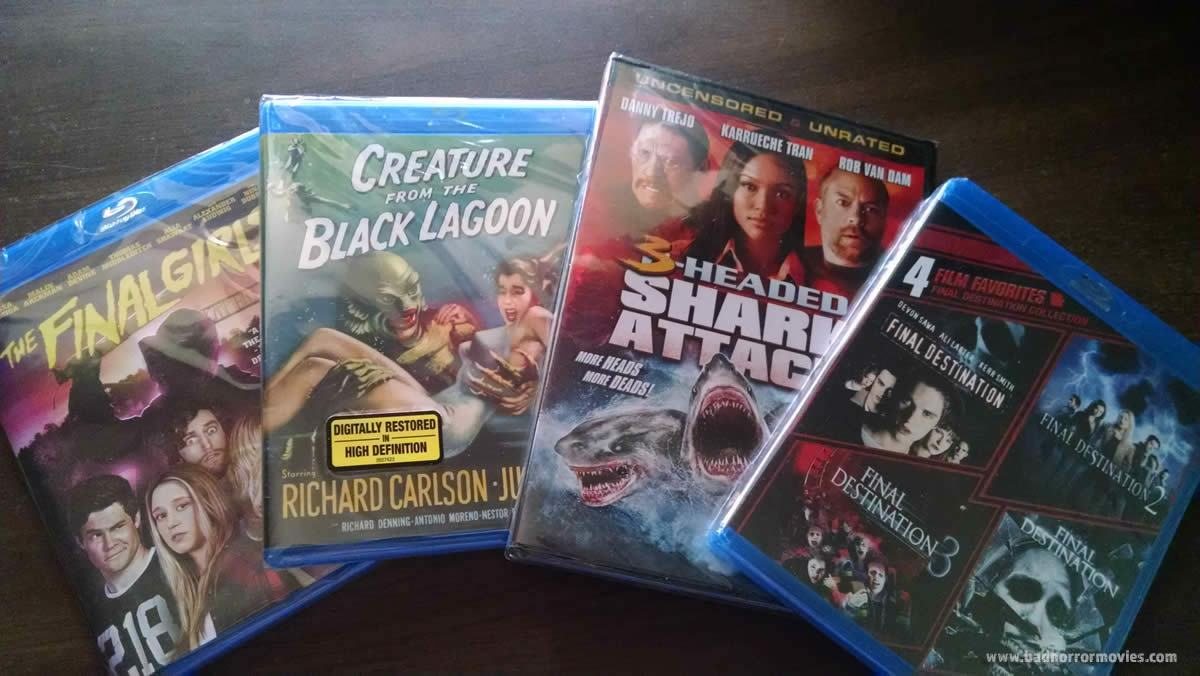 The Final Girls, I have reviewed this movie here before. I love it, in fact to say I love it is an understatement. I honestly don’t like to watch movies I’ve already seen over and over again. This one, I watched the first time with alone, the next time with my parents. After that, I watched it with my kids, my ex-wife and my parents and then again yesterday when the Blur-ray arrived but this time I was able to watch it with the cast & crew commentary. I love me a good commentary! Right now you can get  The Final Girls on Blu-ray for just 14.99! Oh and to the Director of this movie, heads up, it’s not just 14 year old wanna be filmmakers that watch the commentaries. If I love the film, I will always watch the commentary. Also, great job on the commentary.

Creature From The Black Lagoon is probably my all time favorite horror movie. First thing to know about this movie is that it’s actually part of a trilogy. A lot of people know about the sequel, not many know about the third installment. I discovered this when I originally purchased The DVD Creature From the Black Lagoon: The Legacy Collection (Creature from the Black Lagoon / Revenge of the Creature / The Creature Walks Among Us) I enjoyed all three of them but I really love the first one. However, every copy of this movie I have ever seen is Standard Definition. I came across the Blu-ray the other day for just 13.58. I wasn’t going to get it because I made the assumption that it too would be in SD and why pay for the Blu-ray if it’s not in the original format. Just for the heck of it, I checked the aspect ration and… JACKPOT! It’s in the original 1.85:1 aspect ration )or as close to it as possible) and has been digitally remastered. I haven’t seen it yet it’s been sitting on my desk since yesterday, I’ve opened it, I plan to watch it later today! I honestly can’t wait. It’s going to take up the full width of my HD TV! I am so geeked out over this you have no idea! This is just the original in both 2 and 3D versions.

3-Headed Shark Attack. Now to be honest, I don’t know much about this one except that it stars Danny Trejo and it’s a SyFi movie, I love the SyFi movies, not even gonna lie. However, I got it because it has Danny Trejo in it. I can’t wait to see Machete himself whoop ass on this 3-headed beast! This DVD at the moment isn’t available in Blu-ray but get this, the DVD is under 8 bucks! How can you not pick this up? And, on a side note. I am huge fan of Sharks. Seriously, I watch Shark Week and during the “I was attacked” type shows, I’m always rooting for the shark. Love me some sharks! But, as ridiculous as this idea of 2-headed or 3-headed shark sounds, guess what? This isn’t fantasy. Not too long ago a pregnant Bullshark was cut open. She was pregnant, one of the babies, a 2-headed shark. I’m not lying. So, as you sit back with popcorn and your feet pulled up under you, remember, it’s not as far fetched as you might think. Also, this is the Uncensored & Unrated Version!

4 Film Favorites: Final Destination Collection. The Final Destination films are probably my most favorite horror movie series. Final Destination 2 with AJ Cook is my favorite in the series. Seriously, I see truck hauling logs and I pull the fuck over! I have honestly done that. I don’t have these films on Blu-ray and when I came across the 4 pack for just 15 dollars, I had to jump on this and get it. Great, great series. It’s just pure fun. Though I have to admit, I wasn’t a huge fan of the 4th installment. And, there is a 5th film that I need to get because it has a great ending. I can’t recommend these films enough.

Tucker & Dale vs. Evil. If you haven’t seen this movie, stop what you’re doing and get it now. This film is so funny! It’s the most original and fun horror movie I had seen up until the recent release of The Final Girls. It puts a hilarious spin on the traditional, “kids going camping in the woods” slasher films. I promise, this one is a must see. I have the DVD, not the Blu-ray, it’s in my cart, I hope to pull the trigger on it within the next few days.

John Carpenter’s The Thing. What can I say about this classic that hasn’t already been said? It’s amazong, the special effects are still incredible to this day! It’s suspenseful, thrilling, scary and the gore is off the charts in their level of pure fantastical enjoyment. How they managed to make the gore so real and so full of fantasy at the same time, is beyond me. It’s just an absolute must have. And, the best part is that this Blu-ray is right now available for under 10 dollars!

Return Of The Living Dead. Yet another must have on Blu-ray. I saw this when it first came out and have been a fan every since. It blends comedy and horror better than just about all other before or since. It’s a great story, the acting is wonderfully fun and believable. I ordered it the other day and it is due to arrive today, Friday, April 1st, 2016! This movie stars James Karen and Thom Mathews but there’s a few other faces in it you might recognize. The dialog is fun, the ridiculousness isn’t over the top but just tickles you nicely along the way.

There are so many great titles available on Blu-ray right now for under 10 dollars! Too many to list here. And, I’m not talking about all older movies, there’s a ton of new stuff out there as well. But, don’t take my word for it, I already did the search for you. Check them out on amazon.com right now and have fun. If you picked something up, let me know about it below. Or don’t, it’s okay either way.

Want to save on shipping costs? Get a 30 Day Free Trial of Prime!

Already have Amazon Prime? Then how about gifting someone you know that might like it but can’t afford it? Giving them access to stream 1000’s of movies for free. You can’t beat that.