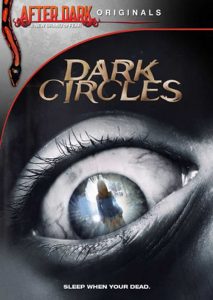 Haunted house film about a pair of sleep deprived parents who begin to experience disturbing visions after moving from the city to a country estate. Alex and Penny have just become parents of a baby boy when they decide that the city is no place to raise a child. Relocating to a farmhouse, the couple finds their relationship deteriorating due to the demands of caring for a newborn, including a lack of sleep. When Alex and Penny begin seeing a mysterious woman around the house, they at first dismiss the sightings as hallucinations brought on by sleep deprivation. But as the visions appear more often, the parents are forced to consider that evils are at work in their home. By the time the truth about their new home is revealed, their tenuous grip on sanity has already begun to slip.
– Written by John Doe TW

I’m on the bubble again.  I should just flat out say it’s a bad horror movie.  But, it did hold my interest even though Pell James character as Penny was mostly annoying.  She went from bat shit crazy to loveable wife at the drop of a hat.   Her character’s behavior was so frustrating, I just wanted her to die.  I wanted the ghost to just fucking kill her and be done with it. I mean she would do stupid shit and then just turn around and blame her husband Alex, played by Johnathon Schaech.  Some will say, “she’s sleep deprived, it’s not her fault”.  I say, the fuck it isn’t?!  She’s a grown woman, the husband is just as sleep deprived and he puts up with her shit for a long time before he finally starts to give a little back.  And, his “giving a little back” is in the form of trying to help her by getting her some drugs so she would finally shut the fuck and get some sleep.

Even though her character annoyed me because I’ve dated women just like her that always have an excuse for their emotional inappropriate and threatening outburst, I let it go.  For the sake of making it through the film, I rationalized her disgusting behavior as just being sleep deprived.

So, if I except the premise that she’s not a horrible person, it’s just the lack of sleep then why don’t like this film?  Because some things happen that are so stupid, they take me out of the film.  And, worse than that, the movie lies.  It sells you on a premise that isn’t true.  Basically, key facts of the film are lies.  It’s one thing to mislead the audience but when you flat out lie, that’s a bad horror movie.

Some of the stupid things.  Our sleep deprived husband looses his shit and walks next door to the construction site and uses a 2 x4 as a bat to busts up some construction guy’s truck.  The site has been making noise almost every day since they moved in and he finally loses it.  Do the constructions guys get mad and beat the shit out of him like what would happen in real life?  Nope, the foreman is calm, tells the sleep deprived husband that he understands and will try to keep the noise down.  Doesn’t even call the cops on the husband.

Another stupid thing.  They hire a babysitter, she’s hot, there’s no way, no matter how sleep deprived the mom is that she’s going to allow some unknown girl to watch their baby and stay in their home while they sleep. Specially, a hot baby sitter played by Jenn Foreman.  Not gonna happen.  But, once again, I let it go.  She’s tired, husband basically picks up a teen girl from the supermarket and crazy wife is good with it?  Whatever.

The killer, she’s behind me on the stairs, isn’t she?

Of course that all changes when they wake up in what they think is the next morning.  They later discover it’s a actually a full day later.  They were so tired they slept a full day.  But, Penny the mom goes back to full psycho mode when she sees her baby is covered in shit because his diaper exploded after not being changed in day.  Why has it not been changed?  Because our ghost killed the babysitter.  Now crazy mom instantly blames the husband.  Like she had no say in the matter to hire this babysitter.  When her and hubby sat on the couch together and interviewed the babysitter.  Still, I let it go.

A few days later, crazy mom Penny is being chased through the house by our ghost and stumbles upon the dead babysitter.  At this point, I wonder, did no one smell the corpse that must be starting to smell pretty ripe by this point.  Apparently not.  Once again, I let it go.  Even when instead of taking the drugs her husband tried to force on her, for her own good, she instead uses them to secretly drug the husband.  I let it go.  She’s done with him at this point.  He can live or die as far as crazy mom Penny is concerned.  Of course that lasts for about minute.  As soon as the ghost comes after her, she’s all back in love with her husband and trying to wake him up and crying for him to be okay.  Yet, again, I let it go.

Sorry I drugged you baby, please wake up, I love you again.

Then the I discover that we have been lied to this whole time.  Our ghost isn’t a ghost.  She too is a crazy lady and has just escaped from a mental institution.  She lost her baby and went crazy insane.  So all the ghost things this lady has done.  All just imagined by our crazy mom Penny and husband Alex.  All the times the ghost took the baby and then magically brought it right back, I guess it was all in crazy mom’s head.  And, that my friends was the last straw for me.

As I have said, a good film can misdirect you.  The best example for this is The Sixth Sense.  It didn’t lie to us.  The film is very good about going back and showing us how we what we had seen wasn’t what really happened.  Dark Circles just flat out lies to us and suggests that what we saw was just both crazy mom and husbands delusions.  That is total bullshit.  They could have done it without lying and it would have made this a really good horror movie.  But, instead they took the easy way out and cheated.

I will say the acting is really good.  The creepy mood throughout the film is set well.  And, for all the bitching I have done about crazy mom Penny, it was Pell James acting that sold me that she was crazy.  I wouldn’t have been so pissed off at her character if I didn’t believe her as Penny.  Any time an actor can actually take a character and make you feel some emotion for them, good or bad, they are a great actor.  So, if you can ignore the flaws, the stupid behavior and being lied to, check out the film.  If you like it, let me know why you do.  Maybe I am wrong?  Maybe I missed something?  But, if you’re limited in time and don’t want to risk it, please, watch something else instead.