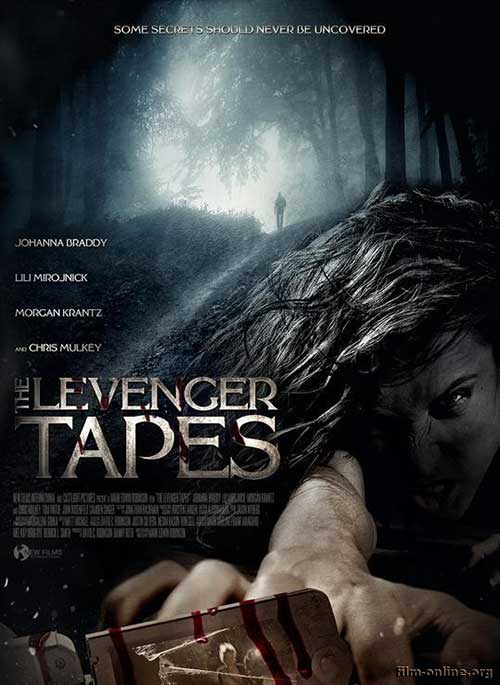 The Levenger Tapes centers around 3 college aged kids driving out to the middle of nowhere to stay at a cabin owned by one of their parents. We know this because detectives have found video tapes of the kids. They are forced to watch every minute of the tapes in the hopes of finding a kidnapped little girl and the remain two college students. The cops need answers. What happened to the kidnapped little girl. What happened to the other two college students. The longer they watch the more disturbing it becomes.

There’s much I enjoyed about The Levenger Tapes. The writing was not good. It’s like the writer decided, “I wonder if I could write a movie where every character does the stupidest things possible at every moment.” I was 37 minutes into The Levenger Tapes and I wanted so bad to stop it and watch something else. There are two reasons why I didn’t. The first being, Lili Mirojnick. She was just so cute and she played the part of the seemingly street smart, bored, sarcastic teen perfectly. The second reason being, was the off chance that all the characters suddenly smartened up and that the story would become interesting.

Yes, Lili Mironjnick’s character Kim, started off interesting but all too soon she was making stupid decisions and doing stupid things like everyone else. My only hope was that the story would at least become interesting. I have to admit towards the end it got interesting only in that you don’t know what’s going on? There’s either a ghost at work or there’s a kidnapper and suspected murderer on the loose. There’s also maybe tiny creatures doing the killing, anything seemed possible at one point or another in the movie but The Levenger Tapes doesn’t really dive into that. It would could have been a fun, scary time but when the characters constantly do the dumbest thing possible it’s hard to give a shit about them. There came points where I just wanted them to die because people that stupid in horror movies, don’t deserve to live.

Here’s an example of the stupidity. Chase, played by Morgan Krantz has a crush on one of Johanna Braddy’s character, Amanda. But, he’s basically, got to very hot girls at his parents cabin that are getting drunk and finally starting to loosen up. What does he do? He decides to head out into the darkness to track down the creepy guy and little girl camping about a mile or so from the cabin and apologize to him for an incident that happened earlier in the film. The girls beg him not to go, he does any ways. The girls end up going with him to track down this guy. They don’t want to go but for some reason stupid reason they decide to go with the guy. It was just unrealistic. That would have never happened in real life. And, at every chance along the way they had to turn back, they refused. The girls wanted to go back. But, nope they kept fallowing Chase. They didn’t even like the guy that much. He was a total idiot the entire time and they just keep following him.

Amanda was no brain surgeon either. She did things that even seemed to out stupid Chase. Like, hearing a screaming voice in the bushes that refuses to answer back to them. What does she feel compelled to do? Go in and check on it. “She could need our help!” Really? Kim is begging her not to go in there. Kim stands and waits. I would have been like, “Look I am heading back to the house. You are more then welcome to run into the dark bushes and look for the source of the ominous screams but I am gonna get the fuck out of her and find some help.”

If you like found footage movies, and characters doing stupid things, you will love The Levenger Tapes! If you’re a teen looking for a date night movie maybe give this a go. Just be warned, there’s no nudity, there’s almost no gore. There’s a handful of jump scares that might be worth your while but if you’re looking for something good, this just isn’t it. This is the very definition of a bad horror movie. And, it’s sad, The Levenger Tapes had so much potential. This movie could have been terrifying, suspenseful and truly scary. Instead it was just a frustrating look at some college kids that are just so tragically stupid I fear some of it could rub on those who watch them.