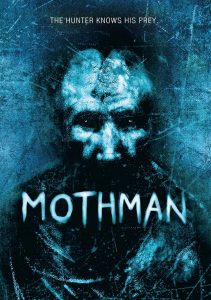 Synopsis – A few college aged kids spend the night at a lake.  One of the kid’s younger teen brother is unwantingly tagging along and is accidentally drowned by the group of friends.  10 years later the group is terrorized by the Mothman. ( I know unwantingly isn’t really a word.  But, it works so I’m using it damn it.)

I need to completely honest about this review because I honestly stopped paying attention to this movie towards the end. I tried to pay attention but I just became so uninterested in the movie and so frustrated by how it started that not even the decent acting by the films strong cast could keep me interested.

You may be wanting to ask me, “Then why are you reviewing it if you didn’t watch it all the way through?” That is a really good question and one I asked myself before finally deciding to write this “review.”  I decided to write my review or let’s call it my “comments” on the film Mothman because I did sit through the whole movie and the fact that it failed so horribly to keep my attention is worthy of writing about it.

There are many problems with this film.  First of which is the catastrophe of writing in the opening scene of Mothman.  The film opens with a group of friends, all seemingly around college age and one young teen. The younger brother character, Jamie, played by Alex Hardee is annoying but only mildly.  The group of college aged friends are stereo-typical at best. It is this opening scene that we learn Jamie isn’t really wanted on the trip but the poor older brother has been apparently forced to babysit him for the night.

Eventually, Jamie drowns in the lake while the group of friends are one by one pulling Jaime under water.  They are just teasing the kid, they don’t mean any harm.  They are just being the stereo-typical dumbass high school/college kids we are used to seeing in movies.  When they finally realize that Jamie hasn’t surfaced yet they quickly discover his body about 20 yards away and he is immediately pulled from the water and CPR is administered. The poorly administered CPR lasts for about 10 or 20 seconds and then young Jaime is pronounced dead.

It was so pathetic it hurt my head watching it.  No one there seemed qualified to make that kind of decision and the only person with almost any common sense was Kathrine Grant played by the always wonderful to watch accept in this movie Jewel Staite.  She is about to go get help when she is stopped.  It is suggested that that Jamie’s death could ruin all their lives. It tried to be that “I Know What You Did Last Summer” moment but failed miserably.

It’s been 10 years since I bashed a rock over a kids head and I’m still giving into pier pressure.

This moment failed because the whole concept was bad for this scene.  The kids death really was an accident.  Only a complete idiot would think that this would ruin their lives.  If the kids were stupid drunk, if there was an obvious amount of malicious intent, I could understand that train of thought.  But, there wasn’t.  Hell, a trained paramedic probably could save poor Jaime.  But nooo, it is decided that they must lie about his death. But, this is a horror movie and sadly I go with it.

Then, the next rash of stupidity in this opening scene happens.  The story that the friends decide to go with is that young Jamie had jumped into the lake and hit his head on a rock.  The problem is that it didn’t happen and there’s no such injury to his head.  The solution, grab a rock and have everyone in the group take a turn bashing the kid over the head with said rock.

Bashing his head with a rock is stupid on multiple levels.  First, he’s supposedly already dead.  So any injury sustained at this point will easily be determined at any autopsy as a  post-mortem injury.  In case the writers of this film read this, “post-mortem” means “after death.” So law enforcement are going to pretty much know right off the bat that the friends are lying about cause of death.

Second, all of them taking turns with the rock, bashing in the kids skull so they are all in it together Is stupid! If their fear was that if they called the police they would all be charged with murder over the child’s accidental drowning then they are already “in it together.” But, even more than that, they would already be in it together because of the felony murder rule.  Again, for the writers, should you ever read this review, look that up, it will help you be better writers.

These two main things are so frustratingly stupid that it became a challenge to sit through the rest of the movie.  I love Jewel Staite and up until I saw this movie, I honestly thought, her smile is so contagious that I could sit through any film no matter how bad it was and that smile would easily get through any film.  This movie ruined that as well.  No matter how adorable and sincere her smile is, it wasn’t enough.  It didn’t matter how good her acting was. Didn’t matter that everyone in this film did a really solid job acting, it was just so poorly written that it hurt to watch.

Oh, there was some bad acting on the part of Jewel Staite I have to point out, now that I think about it.  Towards the end she is firing a shotgun.  She is holding it awkwardly, firing it multiple times and not showing the slightest bit of kick to it.  It was laughable.  Other than that she was flawless as usual.  But, it’s this kind of attention to detail that made this movie absolute shit.  It was obvious the intent with this film was to just cash in on the legend of the Mothman.

The only shotgun in history with absolutely no kick.

This script, as is, was horrible!  A bad script makes for a bad horror movie.  How anyone could have read it and said, “This is great, don’t change a thing, let’s make this movie!”  It boggles the mind!  There is so much fucking talent out there.  So many good scripts and when shit like this gets made and it frustrates the hell out of me.  A script doesn’t have to get every aspect of the law correctly in order to be a success.  By laws, I mean any laws, legal, spiritual, psychical and so on.  Doesn’t even have to get the laws of nature right.  The only thing it needs to do is just be somehow remotely plausible.

All it needed to do was have a believable opening scene with at least somewhat likable characters.  Instead, it made most of the characters unlikable and shallow.  Jewel Staite‘s character Kathrine Grant and her friend in the movie, Derek Carpenter played well enough by Connor Fox were likable but stupid enough to go along with cover-up.  So as much as you want to like them there’s not really any reason to. Once they took part in bashing the kids head in, I kinda lost all sympathy for them and this movie.

After shitting on this movie I think it’s important to point out some things that were good about it.  The special effects.  The practical effects were pretty impressive.  The CGI for the Mothman in it’s early on “ghostly” views I thought looked cheesy but the later effects of the creature looked pretty damn good.  And, as mentioned, for the most part, the acting was decent.  It’s not great but there’s only so much that can be done with a script like this. My recommendation, pass on this one. It’s a bad horror movie and it doesn’t even really have any scares in it.