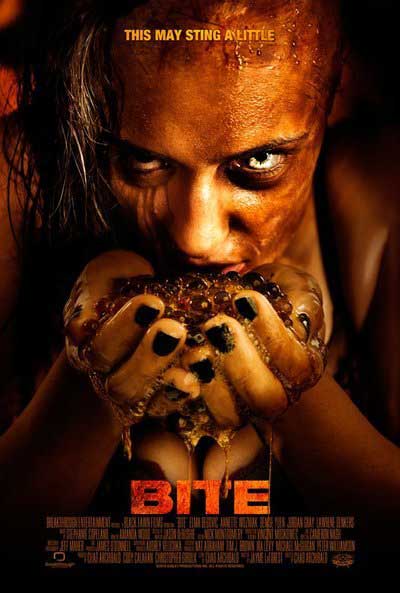 Bite 2015 centers around the aftermath of a bachelorette trip getaway. Casey, the bride to be is bitten by an insect during the trip and also has maybe a little too much fun during the trip that has left feeling more than a little bit guilty but also increasingly sicker as time goes by.

Bite is a movie I have been wanting to see for a while now. Not knowing what it’s about and only going by what the poster suggests, I’m thinking, creepy, yet oddly hot zombie girl and a fun time. There’s a more good to say about this movie than there is bad. The acting is also more than adequate. The makeup and special effects for the most part a pretty damn good. However, some of the makeup effects I think were blown. But, before we dive into the makeup effects let’s talk about the acting and the story first.

I thought the acting was just fine. Some of the dialog could have been a little better. I don’t care how good an actor you are, if the dialog isn’t great, no amount of acting can save it. An example of what I am talking about takes place towards the beginning of Bite. Jill, played by Annette Wozniak almost snaps at Casey, the bride to be, while on vacation. My first reaction was, “Damn girl, you pretty much just told one of your best friends that you want to bang her man.” I felt in that moment, the dialog was maybe giving away something to look out for later in the film. And, I was right. I think it would have played better if it were subtler.

That moment shouldn’t have been as obvious in my opinion. It’s that kind of obviousness that keeps Bite from being the completely fun, gross and an overall cool film that it should have been. Obviousness is actually the key problem with Bite. Almost everything about this movie is Obvious to everyone but the characters and that’s the real shame here.

While on vacation we know Casey gets bit by something. Shortly after arriving home she’s showing some irritation at the site of the bite mark. At first, I’m like okay that she’s ignoring the bite mark. However, all too soon that shit starts spreading and oozing and she does absolutely nothing about it. I mean, it was so obvious that she needed to seek medical attention. What does Casey do? Take a hot bath.

Look I’m a creepy old man, I’ll take a cute, hot chick in the bath all day. Throw some gratuitous boobies at me, totally fine with that. But, we don’t even get that. So, she’s taking a hot bath hoping that’s going to help the bubbling infected growth on her? So instead of thinking, hot girl, bath, boobs, best movie ever! We are forced to focus on the fact that she is too stupid to seek medical attention.

By the time Casey does decide to seek medical attention it’s like way past when any of us would have gone to the emergency room. Instead, she talks to a doctor by phone and he suggests some antibiotic type creams. I mean come on! It’s these kinds of things that just begin to piss us off after a while. They aren’t enough so far to make me give up on the movie. There is, after all, the story behind the bite wound, the guilt she has over cheating on her fiancé during the trip and having little to no memory of it at all.

There’s a side story about the apartment manager, who is also a real bitch and her soon to be mother-in-law. There’s the fiancé who is completely oblivious to the bitch that his mother and that is really frustrating. Then add to it that none of these are ever properly resolved. They do get resolved but they are unfulfilling. Kinda like when there’s that bad guy in the movie and you just can’t wait for him or her to get what’s coming to them. But, when they do, it’s just not good enough, that’s kinda of what happens here.

Then there’s the makeup effects. Most of them are really pretty good. However, they missed the mark a couple of times and I think it became the biggest reason this movie didn’t become a smash success. The first example of this is the final makeup we see our lovely bite victim Casey in. It’s got some problems. It has the potential to look so cool! But, it just misses the mark. The color, the texture is all amazing. The eyes, but then you look at Casey and she’s get this shit on chin that looks like an overgrown soul patch. I’m guessing it’s supposed to like the dried version of the shit she keeps spitting up. But, it just makes her look she’s sporting facial hair and it’s just not working.

The makeup’s not bad, but the rest of the makeup we see as she walks down the hall in that hoodie is just stunning! I mean it’s near perfection but that soul patch, make her look like dark orange Lurch from the Adam’s Family.

There’s also Casey’s fingernails or fingers as she continues to evolve. They just look bad. The color changes abruptly on them and they just look like tiny cones stuck on her fingertips. It doesn’t ruin the makeup but it doesn’t it help it either. It could have been a nice effect but it gets muddied and looks more silly than scary.

Then it happens, she takes off the hoodie and sadly I almost laughed. Instead of making her fully bald or making what’s left of her hair do something cool, like a Mohawk or something, they go for a bald spot with long hair on the sides. It made her look like an old man. She went from creepy hot, to looking like a decayed, hippie Bernie Sanders. All she was missing was his glasses. It just ruined the whole look. I mean it was dazzling, even with the soul patch thing but that hair, it just ruined it. I wanted to be more into the ending but I couldn’t take my eyes off that bald spot and hair.

The story is decent. It’s interesting for sure. It starts off slower than I would have liked and I wish it dealt better with situations Casey was going through. There was just too much confusion going on here. Casey at times seems like she has already made up her mind, that she wants to break up with her fiancé. Then moments later she wants it to work. Then she’s unsure? I understand that she could be having doubts but it didn’t play like that. It should have played like she was just confused about what to do. Instead it played like there were multiple people writing the love story and each one wanted their version to play out and were completely oblivious as to what the others had written.

Also I would like to have seen an interest from Casey as to what the fuck was happening to her. I mean we have to accept that she’s dumb enough to not go to an emergency and has no interest in learning about what is happening to her. Not one Google search on bug bites from exotic locals? All that time alone in her apartment and she’s the least bit interested in figuring out why she’s turning into a bug? Really?

Now, on to the good stuff. For the most part the acting is fine and there’s just something about the actress who plays Casey. Elma Begovic is wonderful in the role. She plays it well, despite her character being forced to do some really stupid things. I found her to be almost hypnotic. She carries the film well. Her two friends Jill and Kirsten played by Annette Wozniak and Denise Yuen are delights as well. Another stand out is the soon to be mother-in-law, Mrs. Kennedy, played by Lawrene Denkers. She played the bitch role of the mother-in-law to perfection. I loved to hate her.

In conclusion, the movie isn’t bad, it’s a great date night movie, it’s got the gross out moments for sure and if you can get past the stupid stuff Casey does. Then it’s a good time to be had. Overall I am on the bubble with this one. I can’t fully recommend it but I do believe it is worth seeing if you’re a true horror fan or just looking for a decent gross out movie. It does start off slow and it starts off as if it’s a found footage film, it’s not. The video works as both flashback and memory for Casey. The video tells the story in many ways. But it’s not a found footage movie so don’t let that scare you off.

I’ve added the link below to The Bite on Amazon Prime. Check it out and let me know what you think.