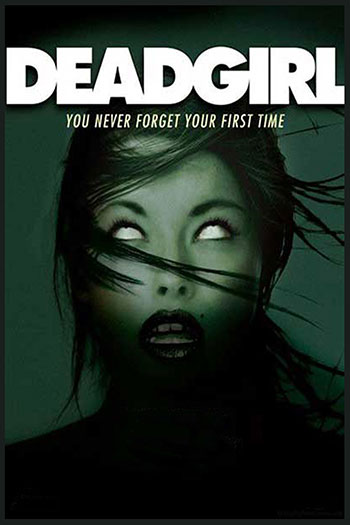 The Deadgirl centers around two less than popular high school kids who find a girl chained to a bed in the basement of an abandoned mental hospital. They soon discover that she cannot die.

I didn’t hear about “Deadgirl” until a few years after its release. It sounded creepy and haunting. The person I know that had seen it said it was really good. One of the best horror movies he had seen in a long time. Yesterday I started to write an article for Bad Horror Movies titled, 7 Underrated Horror Movies You Need To See. I was so sure that I was going to like Deadgirl that I added it to the list. Doing so because I really thought it was going to turn out to be an underrated horror movie. One of the reasons I had put off watching Deadgirl was because over the years I had to come to learn that the person who recommended this movie to me is an asshole. However, I had seen this movie on a few lists of must see’s so I was hopeful.

This afternoon, I made a huge salad, fake crab, chicken it was spectacular. Seriously, I made the best salads. Anyways, I sat down in my recliner and hit play. I was so excited. Been waiting years for to watch this movie, it was going to be disgusting, offensive and it would make me think and question my very existence! Five minutes in, I was starting to feel like I had been duped. Thirty minutes in, it so disappointing, I wanted to turn it off. Thoughts of calling the person who recommended this turd to me and telling them that they have no taste in movies at all, flashed through my head.

Every expectation I had for Deadgirl was not met. Yet in order to explain I have to give away a spoiler, it’s not a huge spoiler because the tagline for the film was, “You Never Forget Your First Time.” So, if you haven’t figured it out yet, these kids find a girl. She cannot die. They keep her chained and rape her daily. There is no way it wasn’t rape. Their rationalizations were ridiculous. Please don’t think that I was like offended and that’s why I didn’t like Deadgirl. I wasn’t. It’s just that I didn’t buy what these kids were selling. Hell, under the right circumstances I would have hit it. The dead girl was fine, in a hot zombie girl kinda way.

This is the problem with Deadgirl. They tried to sell it as some sort of dead erotica with a “what would you do?” theme and it failed. The biggest reason it failed, is that you have to give a shit about at least one the protagonists. The two main kids, were fucking douchebags. One was a coward, the other was a rapist deviant that literally got off on treating the dead girl badly. From killing her multiple times or rather, attempting to raping her and humiliating her. The only fucking likeable person in Deadgirl, was the dead girl. Deadgirl should have been about the dead girl. She was the most fucking interesting character in this movie and yet, the story really didn’t have much use for her other than a prop some of the kids acted around.

Instead the writers seemed to have thought that this was some kind of look into what two high school rejects would do with a girl that couldn’t die. For that work, at all, you need to make at least one of the fuckers interesting, or at the very least, likeable. I just didn’t buy into Rickie’s character. He didn’t like the idea of his friend, JT (Noah Segan) raping the dead girl. Rickie (Shiloh Fernandez) was supposed to be the likeable guy. Well, he was a fucking coward and an idiot. Nothing to like about him, at all.

There was a scene where Rickie gets his ass kicked by the boyfriend of the girl he likes. The ass kicker is “the jock” so of course, he’s also an asshole. If you’re gonna have a “jock” in a movie, he’s gotta be an asshole I guess. I think I was supposed to feel bad for Rickie when he was getting his ass kicked? I didn’t. Mainly I was torn between wondering which one of these dumbfucks I hate more.

For more than 90 minutes I sat through this terribly shallow pile of crap looking for a reason to like it and not finding one. This story had so much potential to be a true darkly erotic and horrifying tale. Instead its attempts at having any kind of death was just embarrassing. You know that really dumb friend you have? The one that every once a while has what they think is a really deep thought? And, you’re thinking to yourself, “Jesus dude, I like pondered that once when I was 9 for like a minute and moved on.” Everyone in this movie was like friend. Well, except for the dead girl and the dog. Both had more depth than all the other characters combined.

Who is going to like this movie? Shallow people that get off on rape. People that are just pretending to actually contemplate, “is it really rape if she’s dead?” So, for the shallow people. I’ll give this movie a slightly better rating than it deserves. I justify this simply for the actress, Jenny Spain who played the dead girl. She did manage to make being dead look hot. I thought she did a wonderful job with her character, with what limited time she had on the screen.

Oh and one last thing, the acting was fine here. I do not mean to take away from that. I thought for the most part all the acting was at least okay. The special effects were more than decent. It just really fails at the story level and even a bit at the direction. Just so many missed opportunities here.

One more last thing. Shallow people, this is for you. I am not dissing you. We all have are shallow moments. If you happened to like this movie and don’t consider yourself to be a shallow person. It’s possible you’re not. I would love to hear from you. Your reasoning’s for liking this turd would be fascinating to me. Maybe you could even get me to see this movie in a different light? And, if you like this movie, good. We all like different stuff and I am glad you found something you enjoyed. As for me personally, I just don’t see it. So who knows, maybe I’m the one being shallow?