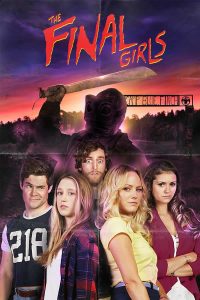 The Final Girls Synopsis as taken from the IMDb page. “A young woman grieving the loss of her mother, a famous scream queen from the 1980s, finds herself pulled into the world of her mom’s most famous movie. Reunited, the women must fight off the film’s maniacal killer.”

I just got done watching The Final Girls a few hours ago.  And, I need to start with an apology before get too heavily into this review.  It seems as of late I can’t find a bad horror movie to review. For that I am sorry because The Final Girls is another good horror movie.  In fact, it’s not good, it’s fantastic.

I started The Final Girls and it couldn’t have been more than one or two expressions from Taissa Farmiga into the movie and I was sold.  I had seen in her the first season of American Horror Story and she was good in it of course but her performance in The Final Girls.  It was perfect, I am at a loss for the words to describe it. She had a quite strength and calm that was infectious.  She reminded me so much of my daughter.

Not gonna lie, I was a little misty-eyed myself right here.

Everyone in this movie was incredible.  The writing was fantastic.  The scenery was visually stunning without being over done.  You could see the detail that was put into every shot. There was a shot done with Malin Akerman walking to her car and the sky behind her was incredible.  That just doesn’t happen.  It’s this kind of cinematography that wins awards.  It’s makes the scene visually stunning without being so over done that it stands out.  It’s not something you notice unless you know to look for it.  Shots like this set an emotional tone.  They manipulate the senses we feel on a subconscious level.  Everything in this movie was just under the level surreal.  Any more and the movie would have come off as too fantasy, not enough reality or horror.  Everything was in just the right amounts.

Being the movie is only PG-13 the language there’s not really too much in the gore department but honestly the movie didn’t need it.  The music was great, the story was so much fun.  The Final Girls has heart and any fan of 80’s horror movies is going to love it.  I graduated in the 80’s and seeing the Jason’esque killer, there was so much in win this movie.  I could ramble on but it would be a waste of time.  Below is link to purchase it or rent it on amazon.com.  Click it, watch it and if you don’t like, we simply can’t be friends.

Oh and I can’t end I can’t have a review without mentioning the fantastical comedic performance of Angela Trimbur as Tina.  The things she did, were so subtle and not so subtle that it you couldn’t help but smile every time she appeared on camera because the more the film went on, the more outrageous her character was.  The whole thing with her in oven mitts perfect!