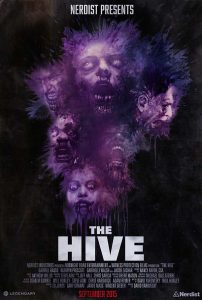 The Hive is about an out of high school teen guy who awakes in a room having no memory of who he is or how he got there.  He’s obviously, sick and infected with something and there’s writing in chalk on the walls with clues as to who is he is.  It’s a horror movie, a sci-fi movie and a mystery all wrapped into one.

I loved this movie!  It was good, I had no idea what was going on or how it was going to end and the clues were fun to follow along with as I watched.  The acting wasn’t bad at all.  In fact one of the actresses, Gabrielle Walsh who plays Jess was incredible.  But, there wasn’t really a bad actor in the bunch.  Everyone was believable and sympathetic.  I have said before that in a horror movie, if you don’t care about the characters in the film then there’s not really any suspense or drama.  And, what separates good horror movies from bad horror movies are the characters.

For example, if you’re just going to make a horror movie with a high body count and the story is really only there to get you from kill to kill, character development isn’t really an issue.  The important thing is good special effects and that’s about it.  However, if you want a film that leaves a lasting impression you need to care about the characters on the screen.  Good characters can even make up for a week story in some respects.  There have been many movies I have liked with stories that had bad endings or even less than interesting stories but I ended up liking them just because I really felt for one or more of the characters.  Thankfully, The Hive has a good story, a good script and good acting.

I wrote a quick review of The Hive on Amazon the other day and to my surprise some other reviews really shit on the movie.  The things they said were so off base that it was like they hadn’t even seen the movie.  They struck me as people that probably hadn’t seen the movie but had something against someone in the film or maybe against the production company.  The comments were just rude and immature and gave no reason for their opinions.  I don’t think there’s anything wrong with being rude or immature but at least give some reasons why,

The Hive was flat out interesting.  I felt like I was involved. The film allows you to play along as the clues are revealed.  It was a blast trying to figure them out along with the main character Adam played by Gabriel Basso.  His character was so fully developed.  I liked that he wasn’t perfect.  He did some douchebag things in his flashbacks but it made him human and we get to see him grow up a little along the way.  Very well played.

Then there was Katie played by Kathryn Prescott.  I really enjoyed her character.  It wasn’t too long into the film before I was every bit concerned for her as Adam, the main character, was.  She was smart, compassionate and funny at times.  One of my favorite scenes with her was when Adam takes her to his make out spot.  At first I am disappointed in Adam because we’re lead to believe he really cares for her and if he’s taking her there, he obviously doesn’t.  But, then she sort of turns the tables on him and it’s pretty funny and endearing.  In that scene we see that Katie is just as smart as we thought she was.  The whole seen was excellent.

I need to also take a minute to talk about the character of Jess played brilliantly by Gabrielle Walsh.  She was so good in this.  At first she’s just another character in the film.  She’s Adam’s best friend Clark’s, played by Jacob Zachar girlfriend.  However, as the story develops her role becomes more important.  In a scene she has while tied to a chair and taunting Adam she is a so creepy and oddly sexy it was hypnotic.

I don’t want to leave out Jacob Zachar who plays Clark.  Though his role as the shallow friend never really has a chance to develop much more than just being the shallow friend he plays it well and with complete believability.  There’s scene towards the end where he suggests something horrible and he does it so well, you don’t really hate him for it.  You understand where he’s coming from and I am sure there are people who even agree with them.  In real life we call those people republicans. Bu-dum-ching!

The special effects were good, nothing was overdone.  It wasn’t a gorefest but they were there when needed.  The story as I already said was interesting, compassionate and really draws you into it.  The acting, was spot on and the story and script were well thought out.

I can understand why some might not like this.  It’s not all laid out for you and if you don’t at least try to think a little while watching it, you’re going to miss out on a lot of the fun.  If you just want to watch a movie unfold and not have to think at all.  This isn’t the movie for you.  I am not going as far to say that this is the thinking man’s horror movie or that this it’s simply genius.  But, I will go ahead and say that if you don’t like this movie, chances are you’re probably just a naturally shallow person.  Not saying that makes you a bad person or anything.  I’m just saying that if you always thought of yourself as having depth, not liking this film is a good indication that the average puddle has more depth than you do.

For the rest of us, The Hive is a fun time that gives you the chance to think a little.  It’s just one of the many things that make this movie such great fun to watch.  I think it would also make for a great date night movie.  You really can’t lose with this movie unless you lack the most basics of human depth.