The Walking Dead: These Theories of Survival Don’t Work

The Walking Dead: These Theories of Survival Don’t Work…

If you haven’t seen the most recent episode of The Walking Dead Season 6 Episode 3 titled Thank You) don’t read this post, there will be spoilers. I have read a few accounts of how Glenn Rhee may have survived.  So far all of them fail, I am said to say. So I will look at two of the main theories I’ve read out and briefly explain why these theories of survival don’t work.

As I mentioned in an earlier rant I don’t normally watch The Walking Dead until the season is over and then I binge watch the whole as to avoid the usual cliffhangers.  However, I have learned one important thing about waiting until the end of the season to binge watch.  No matter how hard you try to avoid all the media attention, there will be spoilers you just can’t avoid. So I decided to watch along with everyone else this season. I am already regretting that decision.

Since I am now watching them the same night as the rest of he world, I have to comment on some these hopeful theories as to how Glenn may have survived and why I’m not buying them.  I will say that Glenn is one of my favorite characters on the show.  I want him to have survived but as of yet, I have not come up with or have read a plausible rationale for his survival.  Not saying that he cannot survive, just saying I don’t see how it’s possible as of now. 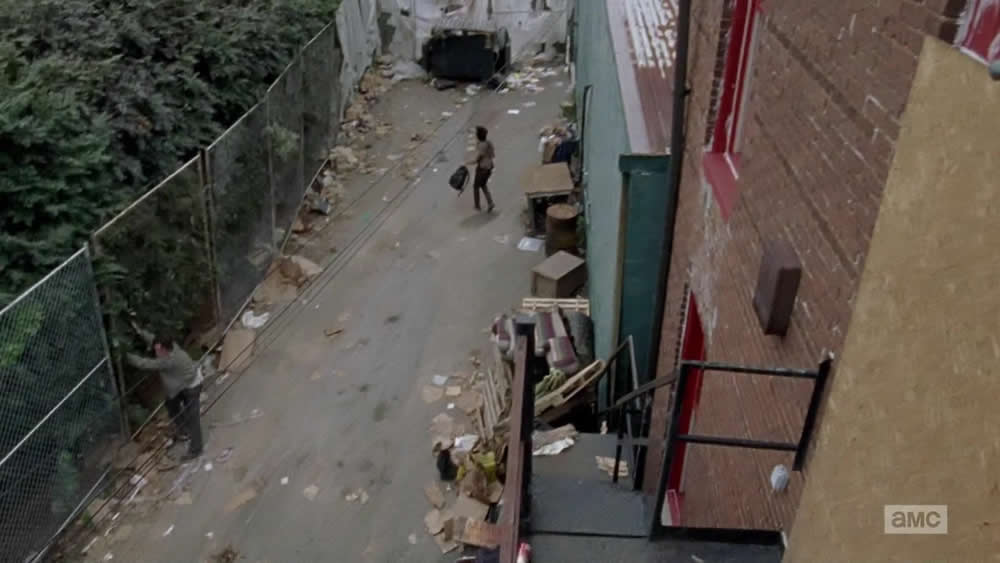 So let’s look at the first theory.  It’s the “Hide under the dumpster theory.” This one is ridiculous. There’s no way there’s room under the thing.  Not even a small child could fit under one of these. That being said, we don’t get a clear shot of the dumpster’s bottom area.  So, the show could have this be a special “magic” dumpster that has just enough room for Glenn to climb under and curl up into the fetal position while he waits for the hoard to leave.  But, I’m not buying it.  There’s no way he crawled under it without being attacked. So, this theory has to be nothing more than the pure fantasy of desperate fans and nothing else.

Now, the second one and much more plausible, at face value, theory is that Nicholas fell on top of Glenn and it’s Nick’s blood and guts we see spewing everywhere.  I even re-tweeted this theory on my primary Twitter last night.  And, I have to admit, this theory got me through the night.  It wasn’t until this morning that I realized it’s also not very likely.  The theory is that Glenn is covered in blood and guts and can now blend in with the zombies and simply just walk away. 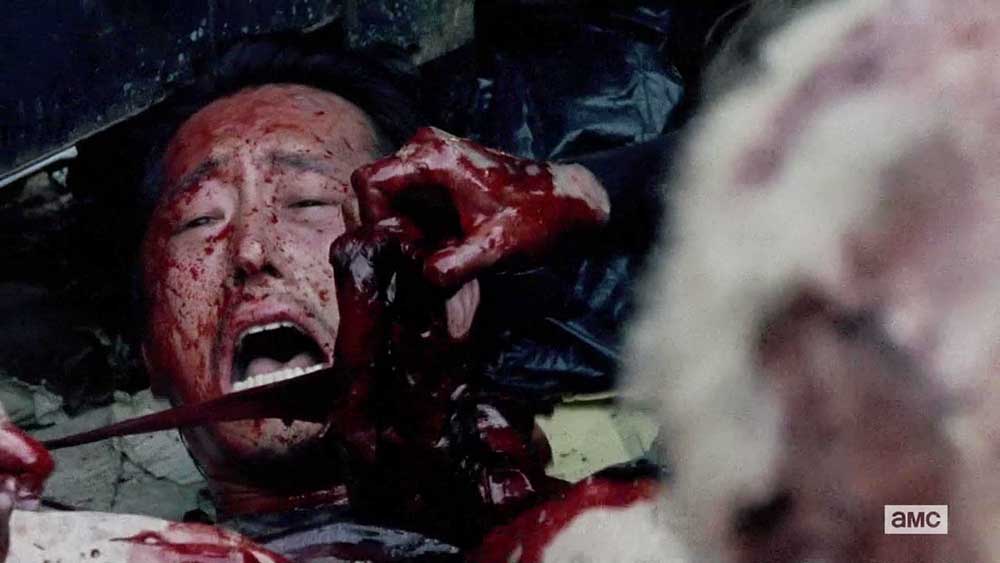 The problem I realized is that in all the times this has ever worked, the person is covered in zombie blood and guts.  Not the recently dead’s blood and guts.  The recently dead’s blood and guts if anything is more of an attraction for the zombies.  The theory of Glenn being covered in Nick’s guts just doesn’t work.  So, unless Glenn was able to rip off parts of zombies and rub them all over himself while on the bottom of the pile, he’s truly is dead and this theory is factually debunked.

What they should have done was overturn the dumpster and then climbed underneath it. It’s at least plausible that the hoard might night not have been able to turn it over.  This would have given them a fighting chance at survival.  Then have Nicholas lose it and try to kill himself.  Instead of getting shot in the head he ends up shooting himself in the neck because Glenn reaches for the gun causing Nicholas to miss his own head.  Glenn eventually realizes that Nicholas will turn. He waits and as soon Nicholas turns, he stabs him in the head.  Now he’s got all the zombie blood and guts he needs to cover himself with and escape by blending in with the heard. Unfortunately, I’m not a writer on the show or it would have played out like that.

I want Glenn Rhee to survive somehow.  I honestly, don’t care if they ignore the rules of the world they created, I really don’t want Glenn to be dead.  All I’m saying is that the two main theories for his survival just don’t hold any water and if he is to somehow survive, I doubt it’s going to due to one of these theories.

Am I missing something? Let me know on Twitter or in the comments below.