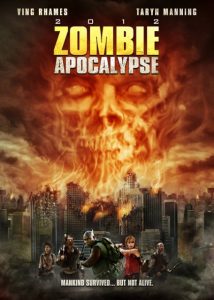 Zombie Apocalypse was produced by Syfy and The Asylum and it’s rated R. The film centers around a few survivors of a world wide viral outbreak that has of course caused the Zombie Apocalypse. These few survivors are making their way to a port in Los Angeles where they believe there’s a ferry that is taking survivors to Catalina.

Though this has some star power behind it there’s nothing new here.  It’s the same old zombie story we’ve seen before. Basically it’s an hour and a half of following the characters and wondering who’s going to make it until the end of the film.  The acting is fine but nothing that really stands out. Ving Rhames plays Harry.  Harry is pretty much the character that Ving Rhames played in the Dawn of the Dead remake several years ago. Taryn Manning also stars in this and her performance is fine too. There’s just not really a lot of character depth in Zombie Apocalypse though the film does try make the characters sympathetic.  It’s just that things happen and we never really get to now any of the characters very well. There’s some attempts at depth by mentioning character’s hardships from time to time but it’s not enough to really make anyone care for the them much.

Being completely honest, I enjoyed Zombie Apocalypse.  I just can’t wholeheartedly recommend it and I’ll explain why.  First, I the special effects, mainly the visual effects are so bad, they’re laughable.  I mean even for the Syfy channel, their bad. Overall the bad CGI didn’t bother me too much. But, It’s a zombie movie and if the acting is tolerable and the characters don’t do too many stupid things, I can deal with it. Second thing, sometimes the dialog didn’t fit the action. It was more comical than frustrating. The third thing that kinda bothered me.  It’s shown that the zombies are learning.  One scene, the zombie shows it’s afraid. That’s it, there was no further evolution of that idea.  Thought earlier in the film there was a suggestion that that maybe the zombies had panned an ambush for the group these theroeies are never fully developed.  Had, they put a little effort into these three primary issues it would have made for a more interesting and pleasurable viewing experience. However, despite these problems I still enjoyed it.  I admit that I am biased toward zombie movies.  As long as the acting isn’t stand out horrible and the special effects aren’t completely laughable.  Sure some of the CGI was embarrassingly bad, the practical effects, what little there was, was tolerable. 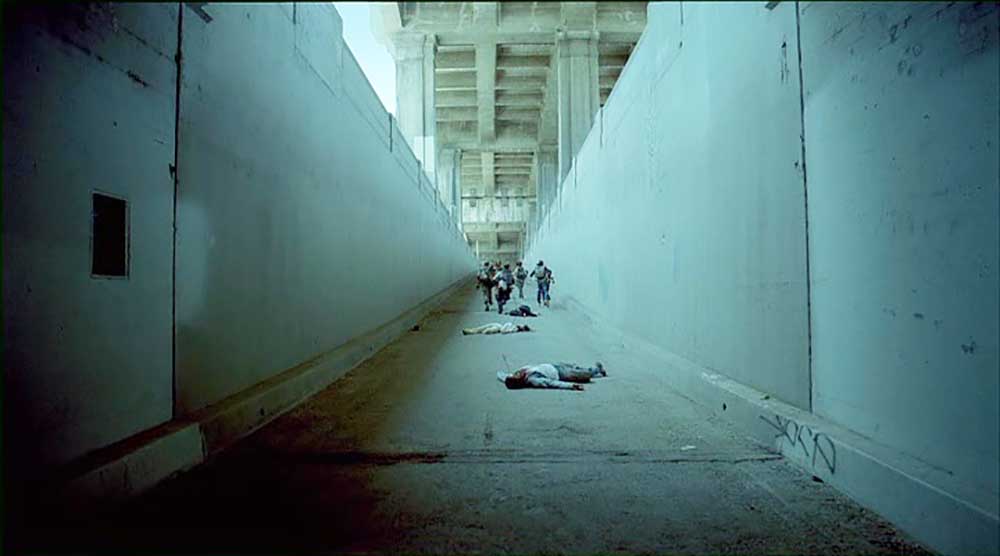 “We have to save every arrow if possible.” Five minutes later, they shoot three zombie with arrows and walk right by them. Zero fucks given about saving arrows.

There were some specific examples of the problems I want to dive into a little bit.  In once scene, some of our survivors use crossbows and bow and arrows. They made a point of saying that if you can retrieve an arrow then do it because supplies are low. Well, in the very next with this group they shoot three zombies and as they stroll right past them, not one character grabs an arrow. They just got done saying, they need to recover the arrows if at all possible and then the who fucking group strolls right past the three zombies without a care in the world.

Another scene that was really hard to take seriously. Two characters have been split up from the rest of the group and they come across a .50 caliber and some ammo to go with.  They put in a shopping cart they’ve found on the street.  Sure enough a few minutes later a zombie horde is approaching them.  One of the characters opens fire on the horde with the .50 cal.  She doesn’t even flinch, no recoil at all. But the worst part is that you can see the rounds on the side of the rifle not even moving as she’s supposedly rapid firing at the oncoming horde. It was just so silly that I just started laughing out loud at it’s ridiculousness. 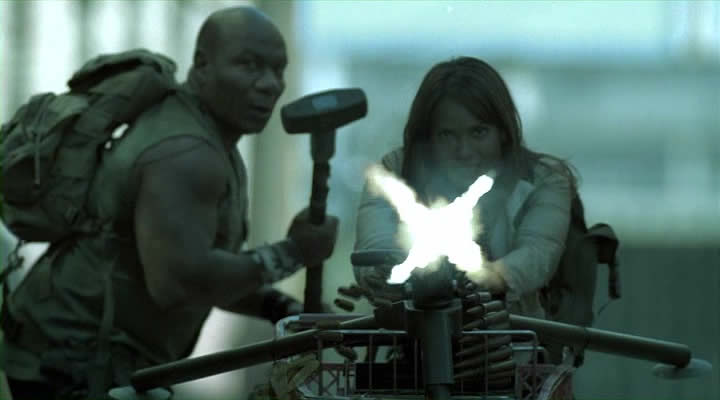 Funny how the ammo dangling doesn’t move on the right and yet the shells come flying out the left side.

Despite the flaws, I still enjoyed the Zombie Apocalypse.  The best I can say as to recommending it is that if you don’t mind bad CGI and some a story that is old and played out, watch it, buy it, have fun with it.  Ving Rhames is his usual awesomeness and Taryn Manning is always a joy to watch.  Be that at as it may, if you’re expecting a good solid story and believable effects, skip it.  It’s why I’m on the bubble with this one.  It isn’t very good but if you are craving some zombie action, give it a go and have some fun.